I watched out for birds in my garden between 8.30 and 9.30 this morning.  Considering the birds who do visit our garden occasionally I was a bit disappointed, but here goes.

I saw 3 blackbirds, two male and one female who mostly chased each other away, even the female chased a male off the area where she was feeding.

2 magpies and 2 wood pigeons frightened off the smaller birds while they were around.  2 collared doves also put in an appearance, but not for too long and they were less aggressive.

Later I saw 4 blue tits flitting about and occasionally using our feeders.

Unfortunately the wren I saw earlier in the week didn't make an appearance.

My results have now been entered on the BGBW website.

I'll leave you with a clip of birdsong, although the robin who was trilling away can't be seen.  The scraping noise isn't some exotic bird, but hubby scraping the chickens' mess off the paving stones on the patio.   There was some lovely bird song while I was working in the garden this morning, but when I tried to record it, the birds stopped singing or even flew away.

Signs of Life in the Garden

I've been pleased to spot some signs of life returning to the garden this week, so I thought I would share them with you.

Once I cleared out as much of the muck and old straw as I could yesterday, I put down some new straw and gave the chickens fresh water.  Then I threw a sprout plant into their run, minus the few decent sprouts on it.  I thought I'd take a photo of the chooks attacking it.  Notice they seem to find the earth nearly as interesting as the leaves, but poor Robin had trouble getting a look in where the green stuff was concerned.

Chicken keeping can be a very enjoyable occupation. There are all those lovely eggs to start with and the birds themselves can be an endless source of amusement, but there are some aspects which are not so enjoyable. 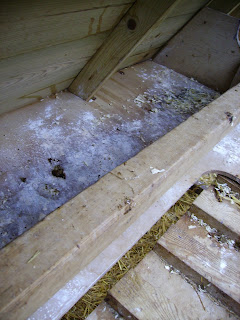 We usually remove the droppings from the roosting area daily, but by the end of a week it can do with a more thorough clean.  We also like to put fresh wood shavings (these should be the dust-free variety sold in pet shops etc) in the nest box as even when no-one has spent the night in there little bits of mud and muck are brought in on the birds' feet when they lay their eggs.  If a bird does spend the night in the nest box we try to scoop their droppings out before anyone lays an egg, although sleeping and egg laying tend to take place in different parts of the nest box, thankfully.


Then I had to start on the lower quarters. To do that I had to let the chickens out and they couldn't wait.


As the chickens are currently on the patio we have put straw down, which absorbs some of the muck,


so that needed raking up 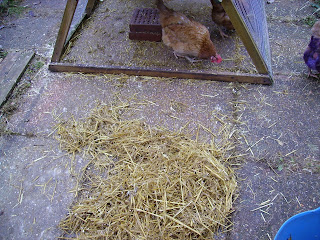 and putting on the compost heap. 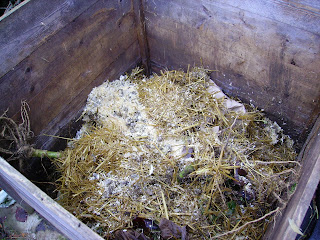 Click Here to Continue Reading
Posted by Karin at 18:07 2 comments:

Email ThisBlogThis!Share to TwitterShare to FacebookShare to Pinterest
Labels: Chickens

Happy New Year, and welcome to Notes on a Garden's new home.  I have a new e-mail address, so I had to make a new blogger account, but thankfully I was able to move my blog across.

The New Year may have only just begune, but it's already time to prepare for the Big Garden Birdwatch again.  The RSPB would be very pleased if you could spare an hour next Saturday (29th) or Sunday (30th) to count the birds in your garden.  It's a good way to find out just what is happening to our garden birds. 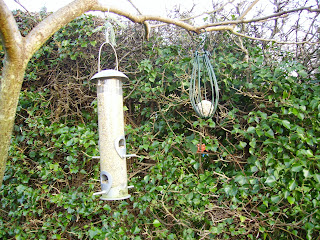 To increase your chances of finding out which feathered friends are living in your neighbourhood you could put out plenty of birdfood and top up water dishes to encourage them to pay your garden a visit.  This is a good thing to do regularly at this time of year, anyway, to help our garden birds survive the Winter.

Apparently early morning is a good time, but any time will do.

You can find out more about how to take part here.

Apologies to readers of my Green and Generous blog, but I thought it was worth repeating here.