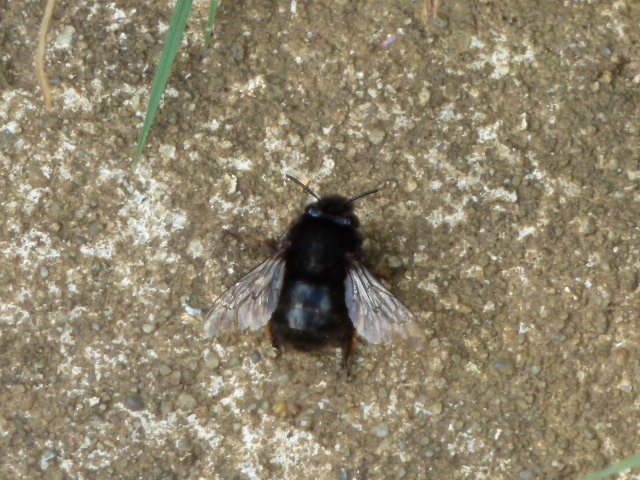 I took the above photo on 26th April and have been trying to find out what it is. I've finally had it identified, thanks to Twitter, by Ian Beavis, Natural History specialist Entomologist ‏from Tunbridge Wells Museum & Art Gallery, a follower of Brigit Strawbridge, who is pretty passionate about bees.

I am told that it is a female Anthophora plumipes, which wikipedia tells me is the Hairy-Footed Flower Bee. You'll see from the picture to the right of the article that the males have quite different colouring.

The internet certainly can be very useful at times.
Posted by Karin at 08:31 No comments:

As we'd had our bees a week it was time to inspect them on Saturday.  You can wait nine days, but this isn't convenient for most people.

We waited until early evening so most of the bees were home and less active. There wasn't much activity around the crown board. 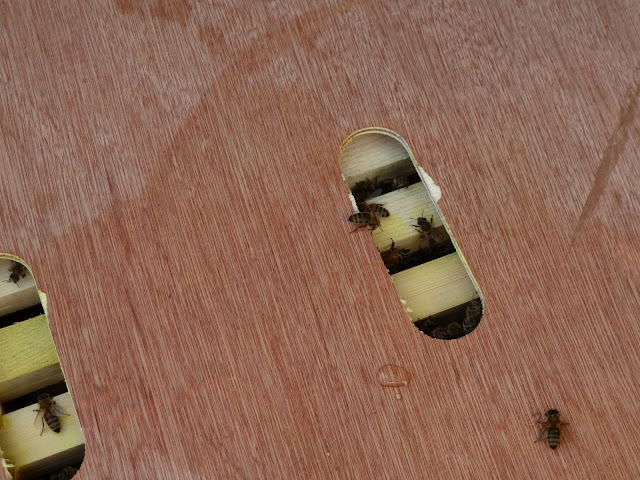 There were plenty of bees on top of the bottom brood box. 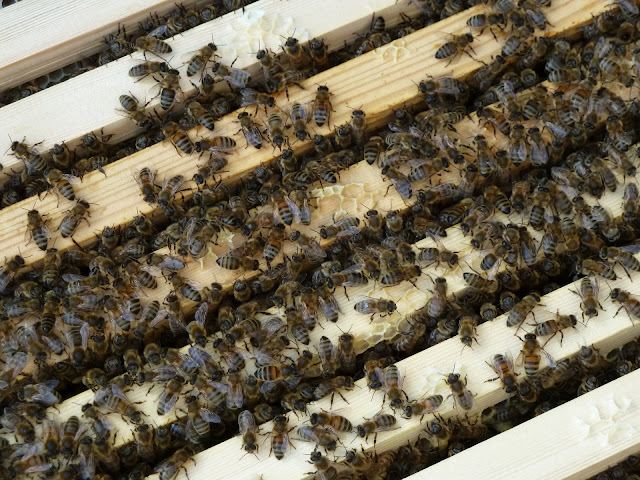 It seemed a good idea to give one or two puffs of smoke so we didn't squash any bees or get stung if one got in our way. 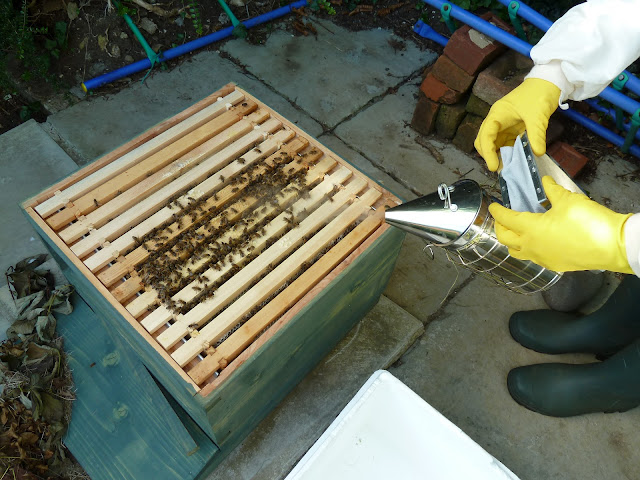 The smoke soon did the trick. 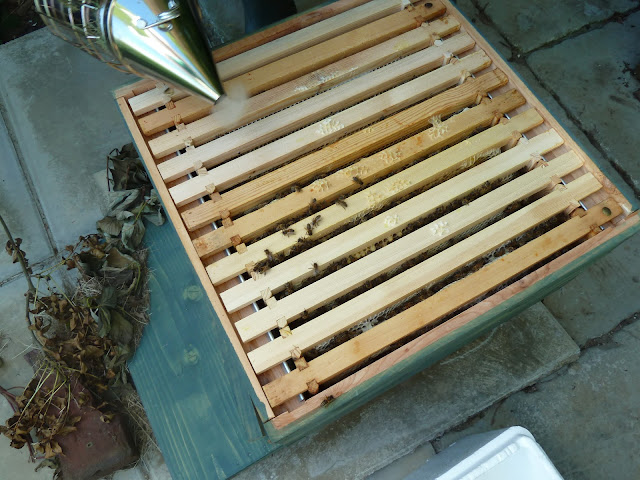 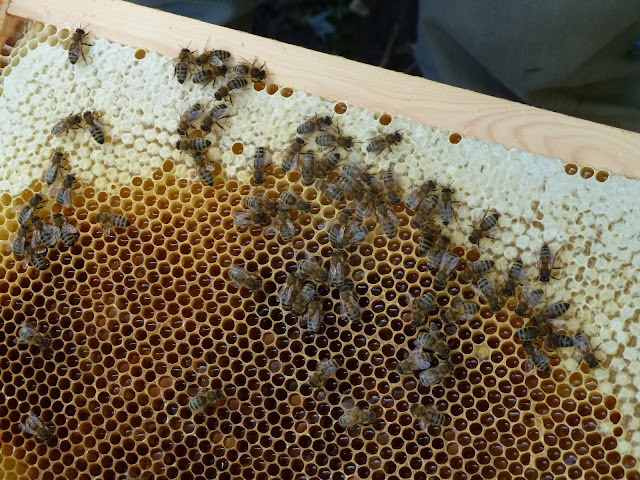 We think they also had a fair amount of capped brood.  This is the area where the queen was last week. However, the sun was in my eyes and we were neither of us entirely sure what we were looking at. 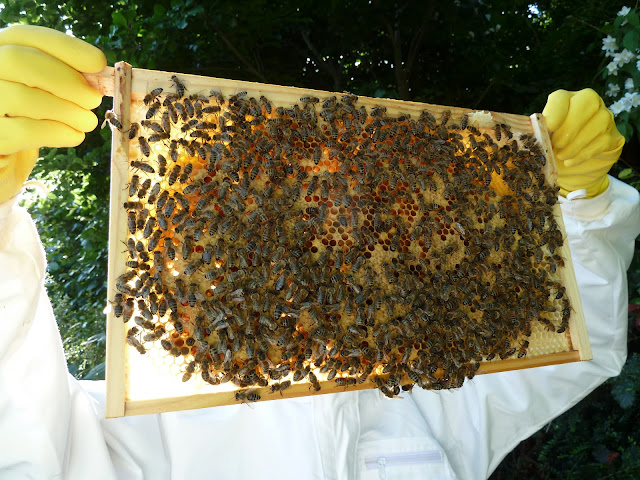 The queen has now moved into the upper brood box, which was only added last week. Unfortunately she is very shy and was scurrying down, so we didn't want to keep the frame she was on out longer than necessary.  Maybe next week I'll be quicker at taking her photo, but I hadn't really expected her to be in that box and assumed we'd missed her in the lower one.

These bees are quieter than the ones we work with on the course, so I felt happier about taking photos so close up.
Posted by Karin at 20:27 2 comments:

Amber has always been the one who lays the biggest eggs, so we felt we couldn't complain if she had gone off lay. She stopped laying late last year but started again when we had the Light Sussex pullets.  However she stopped after a few weeks.  We wondered if she would start laying again with the arrival of our current pullets, but she didn't. Then last week she started laying, albeit thin shelled eggs, which broke easily.  The first two were too broken to use.

On Monday or Tuesday hubby collected a whole egg laid by Amber, although the shell was still pretty thin.  Wednesday I was pleased to find three good eggs in the nest box, something we had not experienced since before Easter until last week. 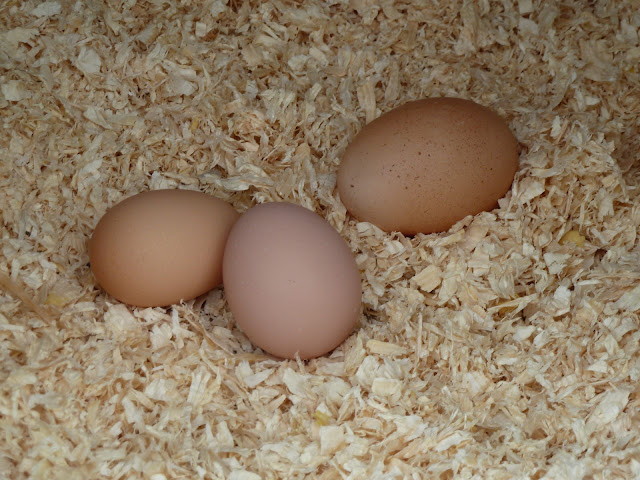 It's easy to see who laid what as Amber's are very big and Fudge's eggs are long and thin and fairly small, no bigger than a medium.  Smokie's are growing bigger.  We have had 2 more eggs from Amber since.
Posted by Karin at 15:50 4 comments: