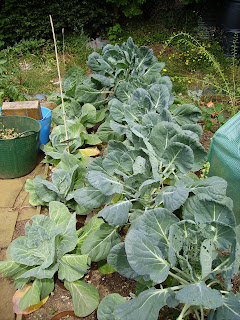 I was looking forward to eating our cabbages when we came back from holiday in the middle of July.  We'd had a good crop last year and I thought I'd grown these in exactly the same way.  However, last year the cabbages had good hearts before they got too big for the cloche I'd grown them in to protect them from cabbage white butterflies and their ravenous offspring.

The one thing we did do differently was to plant the cabbages several weeks later due to the prolonged cold start to the year. We also went on holiday a couple of weeks earlier.

For whatever reason, this year's cabbages were a big disappointment as their hearts had been eaten away by the cabbage white caterpillars, so instead of us eating them we have fed them to the chickens, who have very much enjoyed them as you will see from the clip below when I threw them our very  last cabbage.  That was until I tried to get close to them. 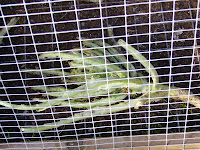 When we put them back in the hen-house we threw the cabbage in with them and it's now not much more than a skeleton.


We still have the Brussels sprouts, though.
Posted by Karin at 17:26 6 comments:

A Day in the Garden Planting Pansies and Lettuces 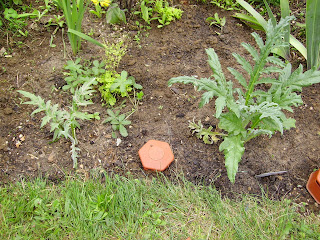 I've had a busy day in the garden today, weeding and planting.  I put in a globe artichoke, which I bought a few months ago, but had put in a bigger pot until I could get round to planting it.  This is to keep my other globe artichoke company, one I grew myself last year, which is to the left of the picture.   Maybe they will both flower next year.  I can but hope. 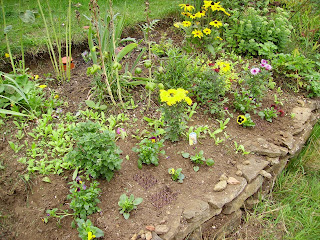 I've also put some pansies in the bed I tidied up a few weeks ago, as it was looking a bit bare apart from weed seedlings.  Something has to go in to keep the soil from washing away and I'd rather have pansies than weeds.

A couple of weeks ago I put in the chrysanthemums, fuchsia and black-eyed Susan (Rudbeckia), the latter to benefit the bees and butterflies.
I'd noticed one of those was growing in the bee-friendly garden at Ryton Organic Garden when we visited it last month, so I thought that would add a splash of colour as well as feeding the bees as Autumn approaches.  When I looked today it was surrounded by a cluster of hover flies. 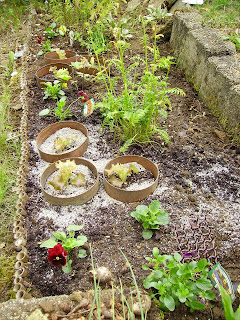 I also bought some lollo rosso lettuces when I was in the garden centre, which I was pleased about as I haven't started any new lettuce plants myself.  I like Geoff Hamilton's idea of an Ornamental Kitchen Garden with vegetables planted among the flowers, and as lollo rosso are attractive lettuces, I've put some in a flower bed by the back garden along with some more pansies.  I'm hoping my husband will like it as he's not so sure about the concept.

There were a dozen in the pack so I've planted the rest in tubs.

This meant a lot more digging and weeding as this bed was also fairly overgrown.  I noticed the soil was quite dry, so I added some compost from our third compost bin, which is the oldest and fairly well rotted down. 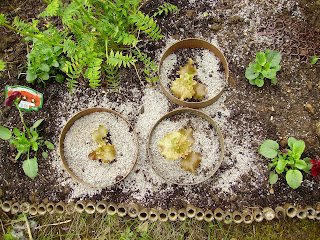 I've put copper rings around the lettuces to protect them from slugs.  I've found these to be quite effective so long as the leaves don't droop over the edge of the ring.  I've had them a few years now and they don't show signs of deterioration, just discolouration, which happens very quickly with copper.

I've also put some grit down to deter slugs and snails, but probably should add some more.  It was a long day in the garden and in the end I was very tired.  I also sprinkled a few Growing Success slug pellets around.  These are available from the organic gardening catalogue as well as garden centres.
Posted by Karin at 19:35 No comments:

Tonight we shall have omelets made with eggs from our chickens accompanied by home-grown potatoes and runner beans. A very low-carbon and low-cost meal, and healthy, too.
Posted by Karin at 18:42 No comments:

A Bounty of Beans 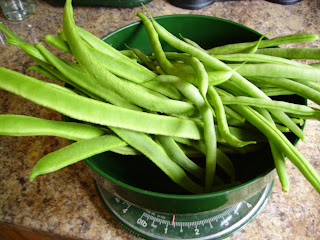 I've picked 7 oz of runner beans and 12 oz of French beans today, we're eating them at least every other day at present.

I need to go and prepare the runner beans for dinner now.

We also had three eggs, which is still quite usual, although once or twice a week we only get two and it seems to be Amber who doesn't lay most of the time we are one short.  She lays the biggest eggs the rest of the time.
Posted by Karin at 17:41 No comments:

The weekend before last I decided to weed part of a flower bed that was looking seriously neglected and after that I took some compost from our compost bins and spread it over the flower bed.  Then I decided I'd put the chickens on the bed to have a good scratch around as they love doing nothing better and they would help remove slugs and bugs, although possibly a few worms and other 'good guys', too.

I kept a close eye on them all the while and decided to put them back in their pen when they started to move further afield.
Posted by Karin at 16:39 2 comments: