Apologies for the wobbly camera, I was using it to shepherd the hens back inside as they looked like they were considering the idea of coming out to play in the snow. However, that has meant some very close up shots of their faces. I'd just brought them some spinach and a couple of outer lettuce leaves, which is what they are playing with down below.

Well, not quite, thankfully. Whatever you think about battery hens, breeds such as Warrens are hardy, which is good considering the weather we are having. They have been confined to quarters due to the bad weather: hubby disconnected their run as it was full of snow, so they would have had trouble walking to the end of it to
drink their water. 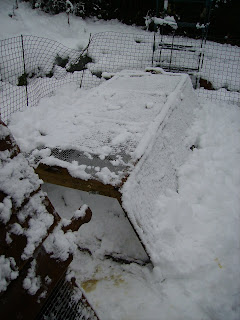 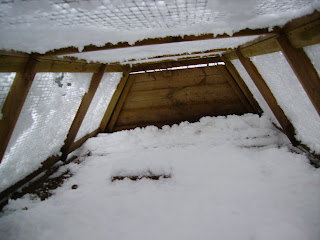 We've had eight or nine inches of snow fall here since yesterday evening. The cold weather we've had since before Christmas means hubby has had to thaw out the chickens drinking water every morning for some while now and in fact he has started to bring it in at night to save time in the morning, although they need fresh water every other day anyway. The chickens now have straw on the ground, which hopefully gives them a degree of warmth. I've used wooden seed trays to give them some protection from the weather and especially to protect their drinking and feeding areas. 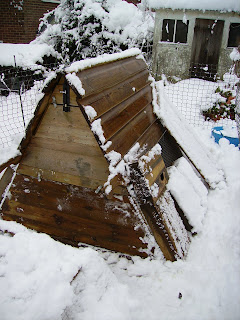 Btw, here's a glimpse of Betsy, who has not yet completed her moult. (click on the photo for a better view.) She hasn't grown her flight feathers back yet so her wings look rather small when she stretches them. The purple patches are where she was a bit raw before Christmas, so we sprayed on some gentian violet in case she was being pecked or was pecking herself. She laid a few eggs for us before Christmas, but has gone off lay again. Apparently it is quite usual for hens to stop laying for a couple of months while they moult. She seems OK otherwise as far as we can tell. Robin and Amber are both laying daily at present. 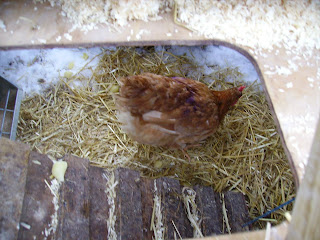 I have been a bit remiss feeding the birds lately, although they have been able to access the seeds, berries and insects in our garden while we have remained snow free and the frost thawed out during the day.

However, I have corrected that today by hanging up a few fat balls and putting a good helping of bird seed on the bird table this afternoon, although I slipped and fell on my way back down the garden, which proves you have to be careful even on the shortest journeys. Luckily the snow provided a soft landing and no damage was done. 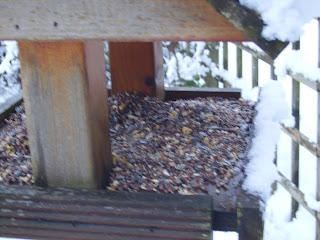 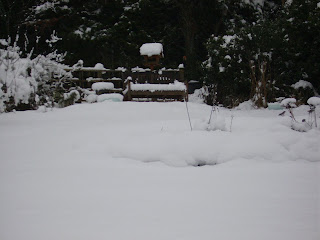 The vegetable garden is covered, of course. 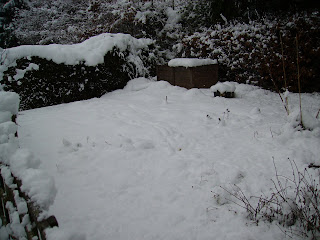 The apple tree had a lot of snow on it, which could damage the branches, so I cleared most of that off while I was out in the garden. 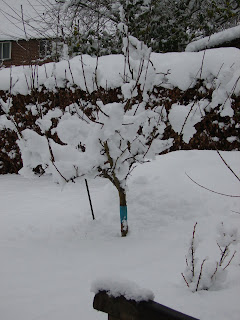 Last but not least, may I wish you a healthy and happy year in 2010 as well as a green and generous one.
Posted by Karin at 16:03 No comments: