Well, Autumn is upon us and the leaves on our sumac tree have to changed rich shades of yellow, red and orange, but most other trees are still looking green. The blueberries are also showing autumnal hues. Now we have bees I'm pleased that we have sources of nectar and pollen in the garden at this time of year. The bees were all over the sedum earlier and last weekend they were still covering the ivy. 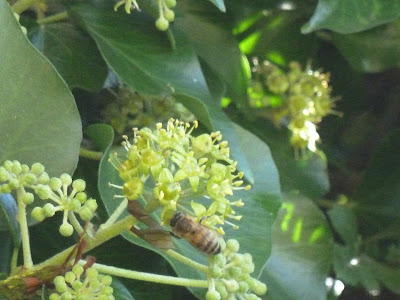 As far as we can tell the bees are doing well. The first hive is very strong and well provided for. We acquired the second hive later in the season so this is not as big, but has still multiplied well and has a reasonable amount of stores.

The tomatoes are slowly ripening, especially the cherry variety. This is the first year I've not had any signs of blight, but they are in pots on the front doorstep, which is sheltered and catches the sun when it is present. 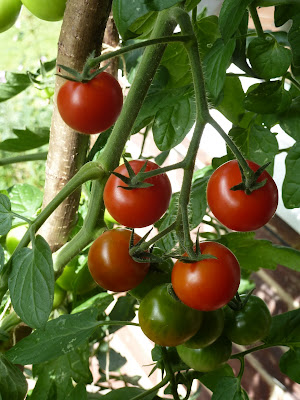 Our runner beans are over now. We have quite a few small potatoes left as well as some garlic and I'm working my way through a Sainsbury's tub full of apples from our apple tree. We've had some pies and crumbles and I've stewed some up for the freezer. I also took my mum a bag full when I visited her last week. 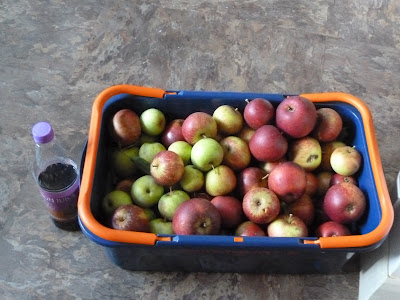 On a less positive note, we lost Amber yesterday, but she must have been about 4 years old as we have had her since February 2009. She was getting a bit stiff in the last few weeks and we wondered if she was succumbing to Marek's disease like the other two who arrived with her, but she didn't seem to have any of the other symptoms. 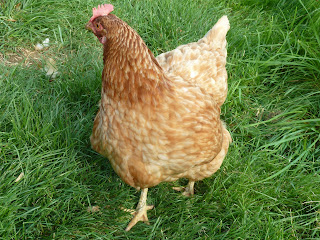 Smokie is giving us an egg most days as is Fudge, but Fudge's eggs usually have very thin shells, in spite of adding extra oyster shell to their feed and giving them copious dried meal worms. In the last week Amber hasn't been at Fudge's eggs before we could get to them, so we've cracked them straight away and put them in a pot in the fridge for omelets.
Posted by Karin at 14:23 No comments: