The Queen is in Residence 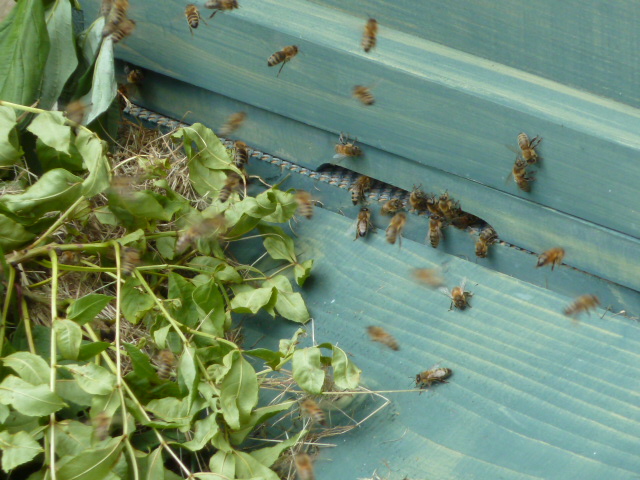 We finally managed to acquire some bees this weekend. Our original source has said his 'nucs' won't be ready for another month, but then hubby spoke to someone he knows and found they had an extra colony. It's just a small one at present, which split from the bees they bought in the Spring. We have seen the queen and it looks like the colony is doing well.  We'll inspect it more closely at the weekend. There certainly looked like a good amount of bees going in and out of the hive late this afternoon.

We live in hope!

So far the broad beans look promising, in spite of early slug damage and being buffeted by the recent strong winds.  On Saturday I finally got round to tying most of them to the bean poles we bought at the South Downs Green Fair in May, which are made from coppiced hazel. I can't find the string or the ties I bought recently. Ho hum.  Perhaps when we have the new shed it will be easier to find things. 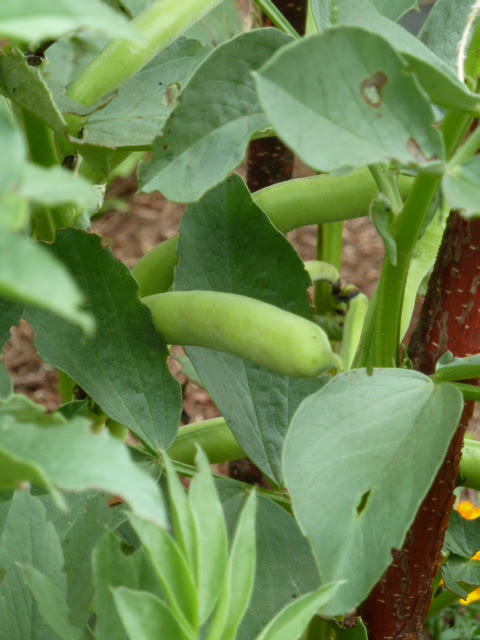 You might just be able to see that I've planted a few French marigolds around the beans to deter blackfly, although it may be too late as blackfly is already present. I've also planted a couple of poached egg plants to encourage hoverflies, which eat aphids, but they won't flower for a while. 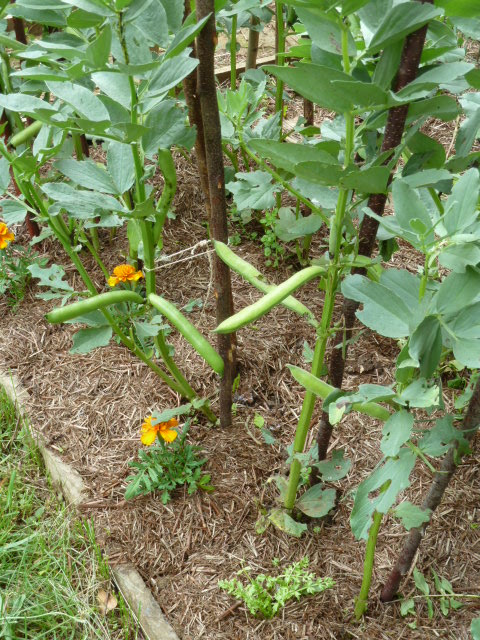 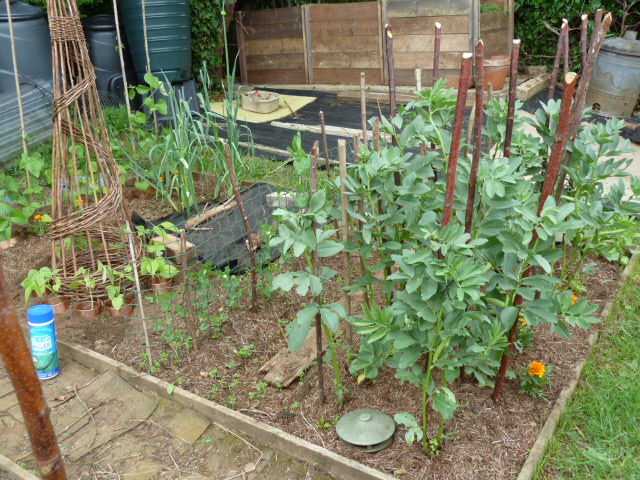 Behind the broad beans you may just make out the peas, which are starting to flower.  Unfortunately the first planting was eaten by slugs, we think, as they were well covered to keep off the pigeons. 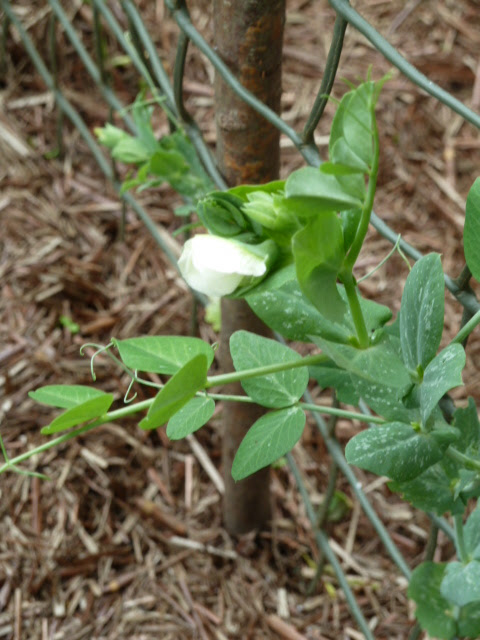 This weekend we planted the dwarf French beans between the peas and the runner beans.  Hubby planted them for me while I weeded a bed for the cabbages as we were due to visit the neighbours after lunch, to celebrate a birthday. I'd bought them at the Green Fair, too, so they were in need of planting. 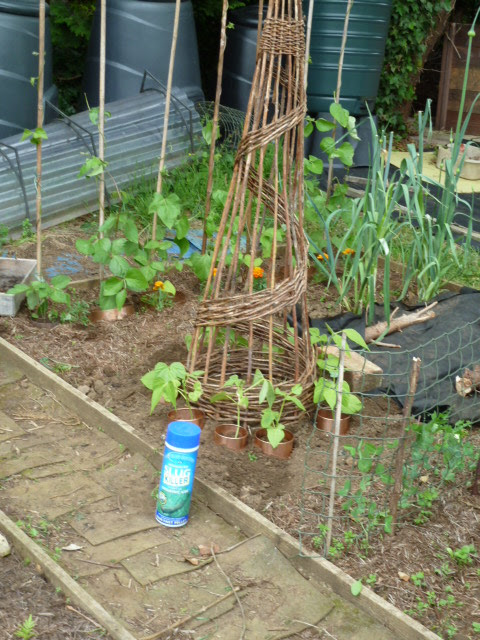 Last, but not least are the runner beans, some of which also needed replacing due to slugs and snails, but seem to have survived the latest wet spell.  One had its top broken off by the recent strong winds, though.  I've planted some French marigolds near them, too. You'll see we are trying to protect the beans from slugs and snails with copper rings as well as a few pellets. 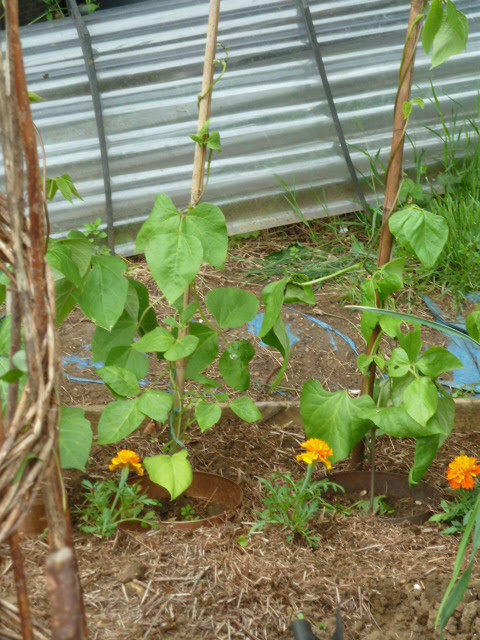 From Drought to Deluge 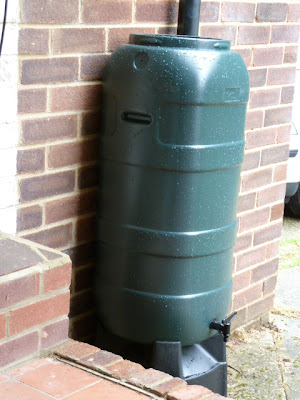 Since I wrote about gardening with drought in mind my water butts arrived, just as the rainy period ended and we went into a couple of weeks of warm, dry weather, but the forecast drought did not materialise and we then went into a couple of weeks of pretty wet weather, with deluges at times. The slugs have been loving the wet weather.  Copper rings and occasional scatterings of slug pellets have not stopped them from doing damage in places.  As I haven't put any pellets on the flower bed near the chickens for a while, I collected a lot from there the other day when I was weeding and fed them to the chickens, who loved them.

Unfortunately hubby hasn't got round to connecting the water butt by the garage to the down pipe yet, so we might miss the current period of wet weather.  We did save the water from my shower one morning, by putting the plug in and then carrying buckets of it downstairs to fill up the butt. I can do that again if the weather turns dry again.

P.S. Hubby has connected the butt to the down pipe today, Saturday (16th June).
Posted by Karin at 12:48 No comments:

It has been fairly busy recently with one thing and another, but I thought it was time I gave you an update on our chickens, thanks for asking, Karen

Fudge and Smokie have settled in well and seem to be in fine fettle.  Amber is not so obviously dominant now, and in fact wasn't looking too well a week or so ago, but she looks much better now, although we haven't had an egg from her in over a month.

Here's a picture of the three of them enjoying the sunshine on Saturday. 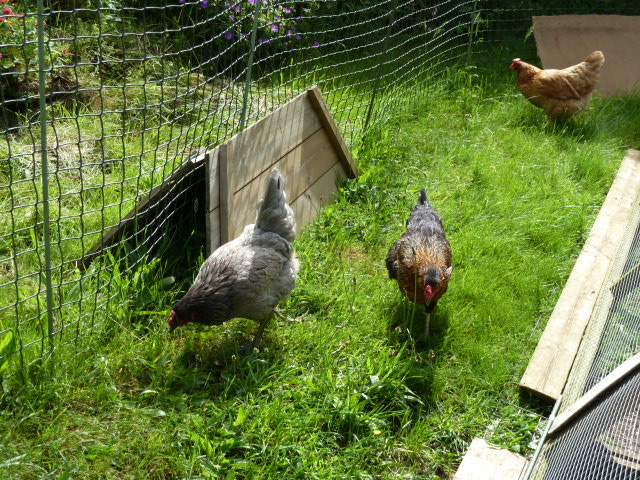