Chickens out and about

We got some more netting on Saturday, so the chickens could roam in a wider area.

Here are a few pictures.

Betsy the blonde, having a stroll and showing off her long nails. She is the oldest, but is currently the most petite. 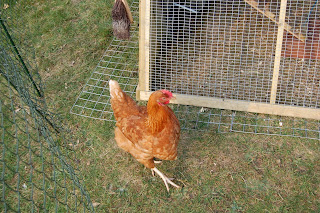 Robin's beady eye. She's pretty sharp and likes to check that nothing untoward is going on. She usually inspects the roost area after we've cleaned it out. 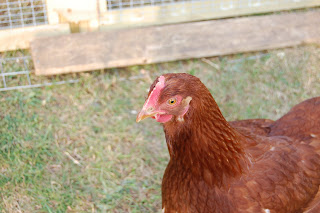 Amber wasn't posing. She's too busy eating lettuce. She was more wary of us than the other two were, but she's started asserting herself more with her sister chickens. 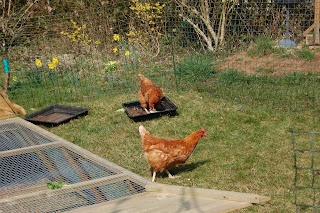 Another one of Betsy, who was happy to pose, and seems very comfortable around us. She managed to fly over the netting and escape into the lower garden, but let me pick her up and put her back, with no resistance. She has got quite used to us now. 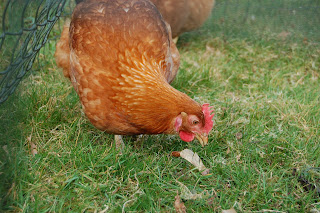 Robin enjoying the view from her roof. 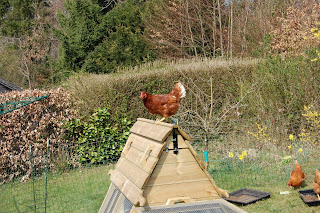 Robin coming down from the roof in a bit of a flap. Watch out down below. 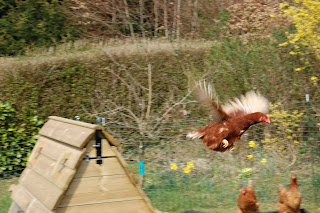 Do you think I could join the ballet? 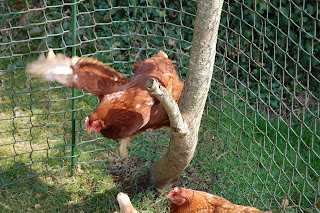 Settling down to three eggs a day

However, on Thursday, there were three eggs in the nest box all at once, by ten past eight in the morning. 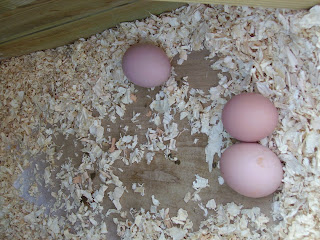 This pattern has continued for the past few days now.

A month of chicken keeping

I'm not sure if I should say, it's only a month since our chickens arrived, or it's a whole month. Sometimes it seems like only yesterday, but they have very much become part of our lives. It would certainly seem like something was missing, if they suddenly disappeared: something that enriches our lives and brings us joy.

One month on we now have all three hens a laying. Today was in fact our first day with three eggs.

I haven't had time to blog today, and I'm a bit tired now. Suffice it to say we were fairly busy in the garden yesterday and I've had a few forays into the garden to plant the odd plant today and will write about how the garden is coming along later in the week.

For now I shall try to leave you with a short video clip of the chickens enjoying a tray of soil we gave them.


If that doesn't work, you can see it here

Busy in the garden

We haven't just been playing with chickens when we've been out in the garden the last few weeks.

This weekend hubby has been busy clearing my log pile for overwintering hedgehogs that had become more of a branch mountain. 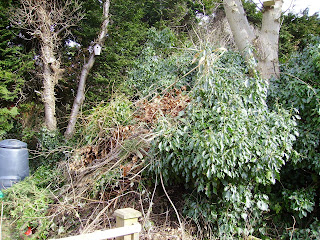 He's been putting loads of branches through the chipper to make mulch.

I planted some potatoes in bags as we are short of space in the veg garden. I planted them with the side with the most shoots uppermost. They are a 'second early' variety called Cosmos. 'Early' and 'second-early' potatoes are ready more quickly than main crop potatoes, but as a result they have smaller potatoes. However, being ready before the main crop potatoes, they are more expensive in the shops, and so are more worthwhile to grow yourself. They are also very tasty fresh out of the ground. 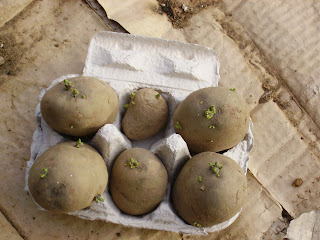 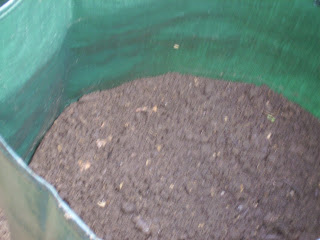 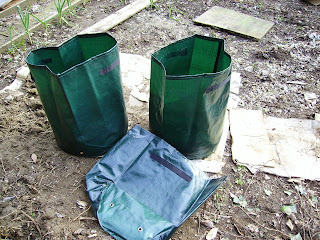 They've been sitting in egg boxes on our windowsill to chit since mid-January. 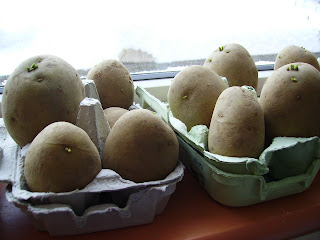 I also put in a couple of pink primroses after moving a few more primroses from that bed into the one on the other side of the path. In order to make way for them I dug out some Lungwort (Pulmonaria), also known as Soldiers and Sailors, as it tends to take over in damp shady areas. 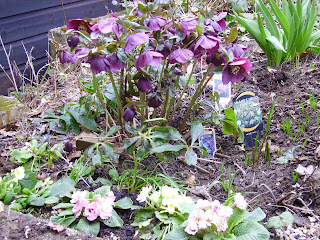 I think the pink and yellow primroses together look better with this Lenten Rose than all yellow ones.

My broad beans and garlic are up and there was lots of sunshine on Saturday for taking photos.

As the weather had warmed up last weekend, hubby cleared compost from the bin I'd found a frog in a few weeks ago and put down some paving stones as a base for our new wooden compost bin, which he then erected on top of them. 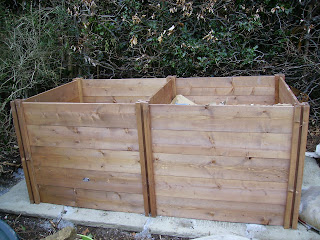 Our first attempt to let the chickens out would have been quite comic to any observers. Hubby had been told they're easy to catch and he had also been told he should clip their wings, so the first weekend he decided we should let them out one at a time and clip their wings. Well, we soon learnt that they are not easy to catch if they don't want to be caught, and we were still pretty much strangers to them. The second problem came after hubby had caught Betsy, but we couldn't agree on which part of her wing to clip. I wasn't sure it was the bit he said, so I thought it best not to do anything. Besides, clipping her wing the first time we picked her up didn't strike me as the best way to reassure her we meant her no harm. So, to date, our chickens have unclipped wings.

Last weekend we let them out again, and hubby had been assured that chickens will just follow you around. Whoever said that doesn't know our chickens. They ranged wide and started to get a bit to close to the garden gate, so we herded them back into their ark with washing up bowls - we have several year's worth of old ones in the garden as they come in useful for all sorts of things.

So this weekend we decided to take control and bought some plastic mesh and poles to fence them off where we wanted them to be. It also proved useful for herding them to the new position for their ark as we are moving it once a week at present. 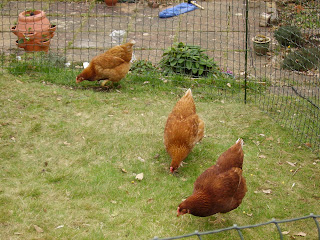 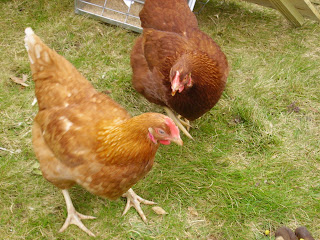 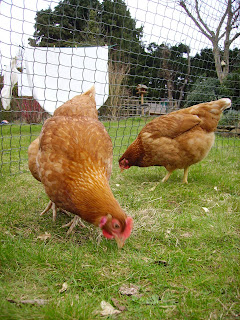 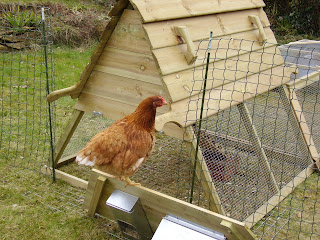 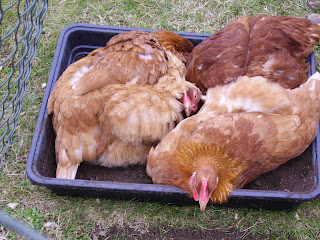 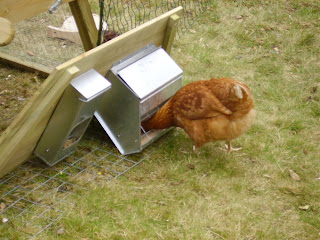 Betsy has been laying her eggs by half past eight, but when I went to check before going to work on Friday she was still sat in the nest box, so I asked daughter to check at lunch time, which she did. In my afternoon tea break I found a message saying that she had found two eggs, but one was a bit broken.

When I got home there was the new egg, with a little hole in the shell, looking very much like someone had pecked it with a pointy beak. 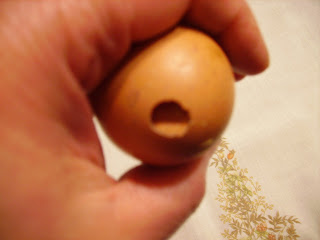 Perhaps Betsy wondered what it was when she went up to lay, who knows. It was smaller than Betsy's eggs have been of late and had a darker brown shell. We're pretty sure Robin is the new layer and her ear lobes are darker than those of the other two, although I don't know if that is a guarantee that she will have darker eggs. I was surprised, as she still seems quite immature compared to the other two, but then I still have a lot to learn about chickens.

In further news about eggs, Betsy laid an larger than usual one last Monday, and when I ate it today we found out it had a double yolk. Her eggs usually weigh 2 ounces (or 50g for younger readers). The one with a double yolk weighed 3 ounces (75g). 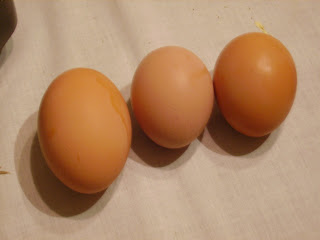 The picture shows Betsy's large egg next to her normal eggs. Betsy is an extremely good layer so far, having laid every day except one since she started.
Posted by Karin at 16:29 No comments:

I was sad to hear of the death of Geoffrey Smith at the weekend. I remember watching him on TV as a teenager, and my mum laughing at the way he would take a handful of well rotted compost and speak about it as if he was about to eat it. He was certainly a 'down to earth' gardener, but he was also clearly enthusiastic about gardening in a way that was infectious.

He has been quoted as saying, "some people go to the whisky bottle, I go into the garden", which strikes me as a very sound philosophy.

Gardening is great therapy and is used to help people overcome depression, but it is also a wonderfully creative and productive way to get rid of the day's stress and unwind reflectively after a busy week. Of course, if you're not used to gardening or any physical activity, it's best to take it easy so you don't end up with any injuries, and for the same reason you do need to exercise care and common sense with sharp instruments such as garden forks and shears as well as when tackling brambles and other plants with prickles and thorns.

Overall, though, the world would be a much better place if everyone spent an hour or two a day in the garden. Is it time the government introduced a compulsory gardening break on top of the lunch break? Would employees be more productive as well as more harmonious as a result?
Posted by Karin at 10:19 1 comment: