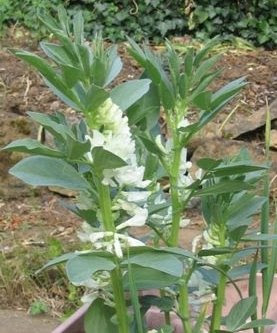 I love broad beans, but haven't met many people who do. I think this could be because most people have only come across rather dry and floury broad beans, which they bought in a shop. It may make commercial sense to pick your broad beans when they are bigger so you can make more money when you sell them, but it does nothing for the taste and texture. If you want beautiful, tender and succulent broad beans you have to grow them yourself.

Broad beans can be planted from November to May. If you plant them in the Autumn it is best to plant them when the soil is still warm. In milder regions this is the best time to plant in order to avoid black fly infestations, which can damage crops and looks unsightly. If the plants start to come through during very cold, frosty weather you might need to cover them with a cloche, but don't leave it on when the weather warms up or the plants will not become hardy and will also be more susceptible to black fly.

If you sow the seeds between November and January you need to use seed suitable for that time of year such as Aqua Dulce. 'The Sutton' is a dwarf variety suited to small gardens.

I prefer to sow my broad beans early in the season, but wasn't able to do so this November. In fact it was the 27th December before I was able to. This coincided with the new moon, which the ancients and even farmers a few centuries ago thought was a good time for planting and sowing. We shall see if this makes a difference. 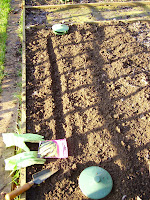 The bed I'm using for legumes this year was used to grow root vegetables last year, so it had already been dug quite well. Hubby spread compost from one of our compost bins on it early in the Autumn, so I just raked it over, removing any major weeds I spotted and raking in the compost. I was then ready to make my first drill with my trowel.


I then put my bean seed in 2 inches deep and about 5 inches apart. 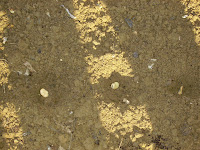 I used the trowel as a guide. 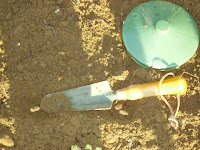 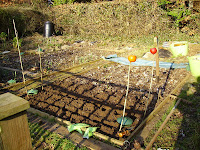 I repeated the process, making a second row and put some canes in at each end of the row. You'll notice both the canes on the right have bird feeders on top. One fell off shortly after and the second had been knocked off the next day, presumably by an over heavy bird trying to perch on it. Perhaps they should not have been left out in the Winter.


I then raked it all over and trod on the soil lightly to firm it. 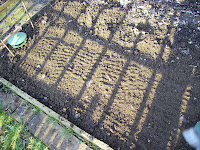 Towards the end of the process I noticed I had company. 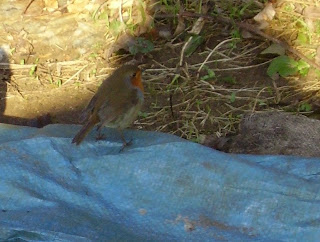 More detailed info on broad beans can be found here.

What to do in the garden in January.

It may seem that there is not much to do in the garden at this time of year, but when the ground is not frozen it can be dug in preparation for the sowing and planting to come. Compost can still be spread on the soil to rot down and let the worms incorporate into the soil and it is also a good idea to spread leaf mould or dry fallen leaves onto beds that are prepared and waiting for Spring.


Now is also a good time to plan what you will grow throughout the year to come and how you will be rotating your crops.

The Garden Organic website explains how to make compost and also provides a useful reminder of all the things you can be doing in the garden each month. Members can access a guide to crop rotation, but the RHS guide crop rotation is available to everyone.

On mild days onion sets and garlic can be planted and broad bean and pea seed can be sown. I decided on Autumn planting onions, which I put in in September, and will wait till the Spring before planting any more. This was just as well as I was unwell for a couple of months after that. It turned out I was anaemic, but once the iron tablets started working I got back to normal fairly quickly. However, with all the Christmas preparations I only managed to sow my broad seed on 27th December.

I didn't look for garlic soon enough and haven't been able to find any, so am now waiting for the Spring planting garlic to come in. I would like to plant it soon as I'm told it does better if it endures a cold spell to begin with. Last year I waited until February and it didn't do very well.
Posted by Karin at 16:33 No comments:

A new addition to our garden this year will be 3 brown Warren chickens, at least that is what we are expecting. Hubby ordered a Boughton starter kit complete with 3 point of lay pullets from Forsham Cottage Arks yesterday as they were part of a good offer. They are due to arrive with their housing and a man to set it all up, mid-February, which is a bit earlier than we had originally planned, but it is starting to feel quite exciting.

We hope the Boughton chicken coop really is 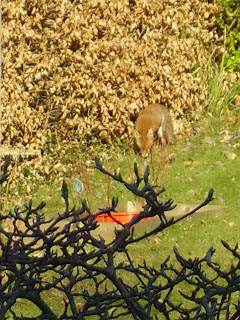 fox-proof as Mr Fox, or was it his wife, was sniffing around our garden this morning and we know the Fox family often pay us a visit at night.

Warren chickens are a hybrid breed bred for the battery farming of chickens, also known as ISA Browns. They are a French breed of chicken, which is a cross between Rhode Island Red and Rhode Island White chickens. This means they are hardy and good egg layers. From what I can gather they probably lay brown eggs. It sounds like they could be a good breed of hen to start with, but I think I'd like to try something more interesting if our initial experiment proves successful. Our daughter had her eye on some Sussex hens, but we don't know what is available locally.


The photo is the best I could manage from the kitchen window. With reference to the photo below, the fox is just above the raspberries and blueberries.
Posted by Karin at 14:52 4 comments:

A view of the garden

This shows our garden with a dusting of snow this morning. It was taken standing on the patio. You can see this side of the 'rockery' and the steps from the patio in the front of the picture. 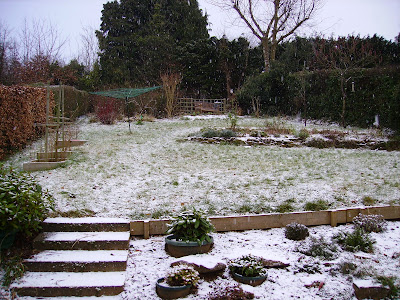 At the top of the picture, in front of the tall trees (Leylandii?) you should be able to make out a trellis, although the bench is in front of the trellis. Behind this trellis is our veg garden.

On the left hand side are the raspberries, and behind them my 2 blueberry plants.

Here are my blueberry plants the Autumn of the first year I had them. 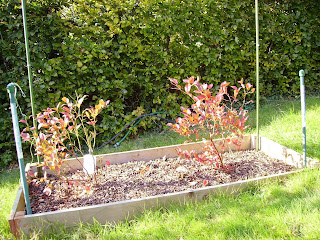 Last January hubby constructed edging for three beds and paths in between. The bed in the foreground, with sticks to mark where I've planted this year's broad beans is the same size as the furthest bed where a few sprout plants still linger. The middle bed is longer and wider than these two. 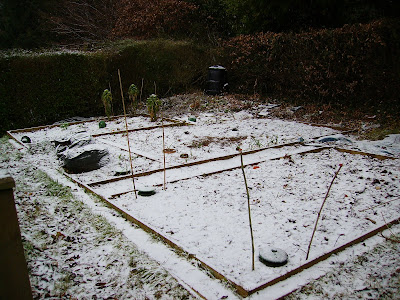 This is not a picture postcard veg garden, but it provides room to grow vegetables and the soil is in fairly good condition. Since we had the ash tree pruned the plot gets plenty of sunshine on sunny days.

I have placed two slug pubs at either end of my rows of beans, although I am not planning to put beer in them until the weather is warmer. In the far corner you might be able to make out a black plastic compost bin. Making your own compost is very important if you want to grow organic veg. We are planning to buy a wooden compost bin as it should make better compost than a plastic bin. 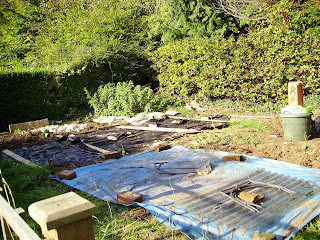 Email ThisBlogThis!Share to TwitterShare to FacebookShare to Pinterest
Labels: Compost, Grow Your Own Fruit, Veg garden

The gardener's hopes and dreams

I've been interested in gardening organically for a long time. Both my parents are gardeners. When I was growing up my dad grew a lot of the veg we ate and my mum looked after the flower beds. So naturally I hoped we'd grow a lot of our own veg once hubby and I were married, and we have grow some veg with varying success. However, already in my teens I began to develop an interest in what we humans were doing to the environment and started to wonder about the wisdom of throwing chemicals around the garden.

When we moved to this house, nearly 13 years ago, Geoff Hamilton was on the tv presenting a series called 'The Ornamental Kitchen Garden', which was about growing veg organically as well as growing veg amongst the flowers. However, at this stage hubby grew the veg, letting me take care of the flowers, and he didn't think they'd grow properly without a good dose of 'Growmore', a sprinkling of slug pellets and the use of an insecticide whenever he saw something that might threaten his crops. I didn't know much about gardening organically at this stage, I just knew that it meant we should stop using the chemicals he relied on. I had no idea what we could use instead. I'm still no expert either where gardening in general or gardening organically is concerned, but I know more now than I did then.

I think a garden should be a place that helps you feel happy and relaxed, so I try to keep the flower beds looking nice, but I also think that a happy, relaxing garden is one that works with nature, that looks fairly natural and is a garden where birds and other wildlife are at home.

For a long time now I've been itching to try to grow tasty, fresh veg for our table, so in the last few years I've been experimenting with growing a few things such as broad beans, garlic, tomatoes and Autumn planted onions.

I've also got a couple of blueberry bushes, which I'm very pleased with.

Last year we found the weather a bit of a challenge, although it did mean we didn't need to do much watering. So we are ready for another year of trying to grow veg organically and hoping the weather will be more favourable for gardeners and hoping we shall be more successful this year than last.

Here's a glimpse of Loseley organic kitchen garden, which I've found particularly inspiring not least because it is local, but I also happened to know the previous gardener who was very enthusiastic and informative about organic gardening. 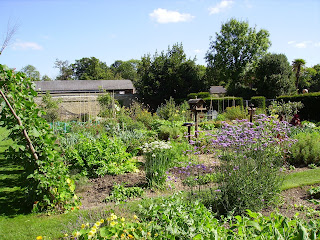