Last Saturday we bought three more hybrid pullets, Gertie a Black Rock type, Hettie a Cuckoo Marain and Josie a Light Sussex.  A week and a day later they are still quite nervous. 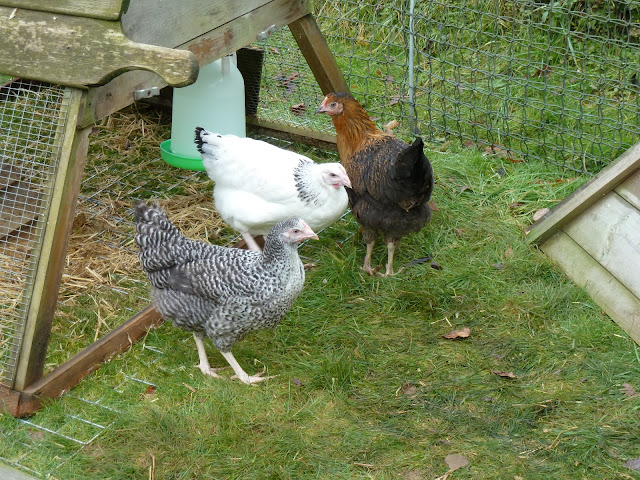 Stella is still with us, but sadly Doris died at the end of September and Meg died earlier last year. 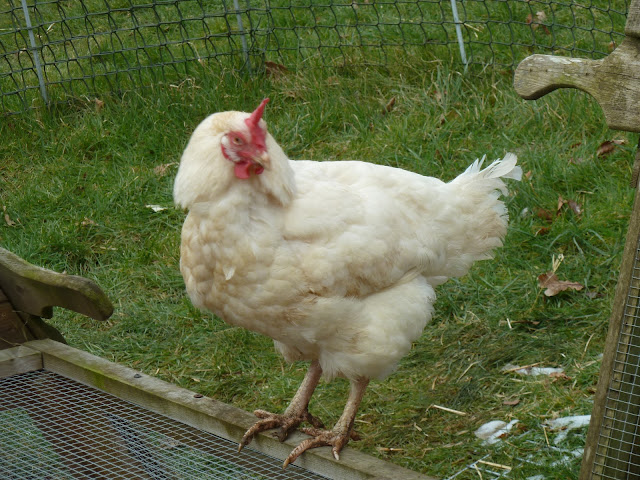 It's been a while since I've updated this blog. In the meantime we lost our two older chickens, but the young ones seem well. They didn't lay so well during the Winter. We had at least one egg every day and 2 eggs a couple of times a week, but now the days have begun to lengthen we have started to have 3 eggs most days. At Christmas we almost needed to buy eggs with all the baking we were doing, but now we have more eggs than we know what to do with. 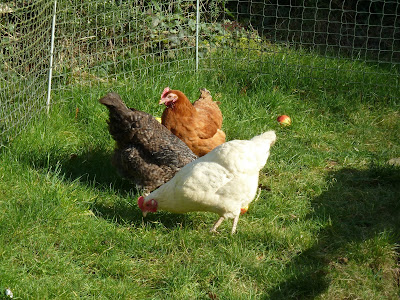 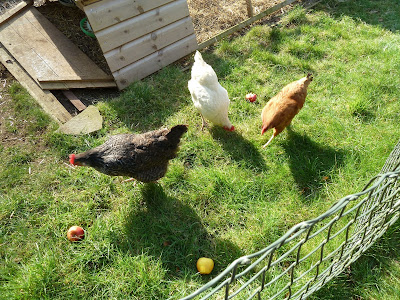 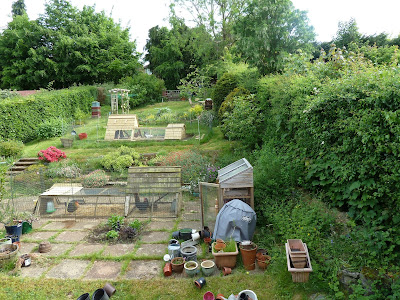 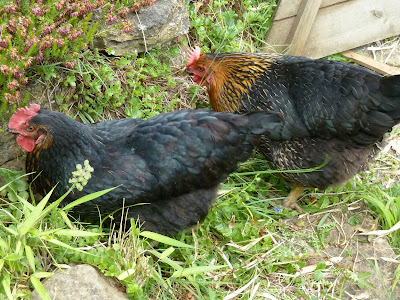 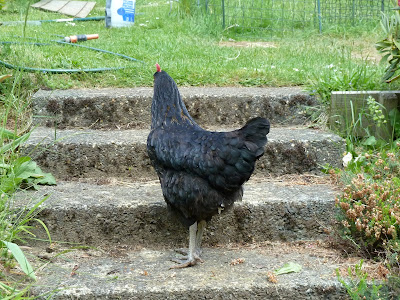 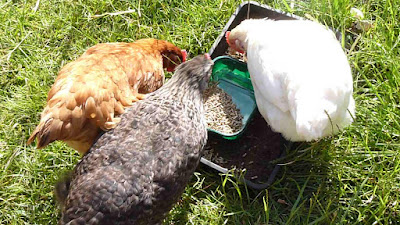 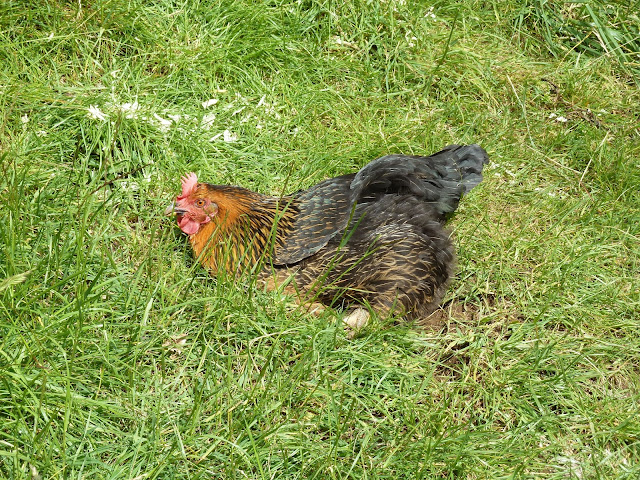 I went to visit my parents yesterday, so our daughter collected the eggs and Stella rewarded her by laying her very first little egg, weighing just 40 g, although not especially small for a first egg. 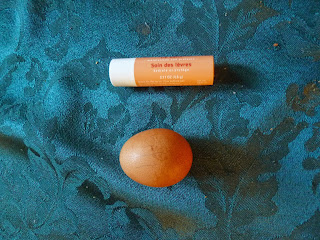 If Stella had stayed on the antibiotics prescribed by the vet, Baytril, we might not have been able to eat Stella's eggs yet because you have to wait 15 days from when the chicken comes off that medication, although possibly not at the dosage she was prescribed, which was quite low. This is because it takes 15 days for an egg to develop.

However, we had trouble getting her to take the antibiotics and so were very pleased when Caroline at Surrey Poultry offered to look after her for us as she had lots of experience with poorly chickens and getting antibiotics into chickens. As it happens Caroline uses Tylan, which does not require a withdrawal period. Yesterday was only her 9th day since finishing the antibiotics.

Today there was only one egg in Stella and Doris' nest box. It was smaller than the eggs Doris has laid recently, only 50 g, although quite a jump from Stella's tiny egg yesterday, but I suspect it is her 2nd egg and the tiny white feather on it makes me think that is even more likely. Doris has laid about 6 eggs in a row, so a break from laying is quite in order. As she is a Speckeldy I think she is meant to lay less eggs than Meg who is a Columbian Blacktails and so she is likely to have more rest days than Meg. 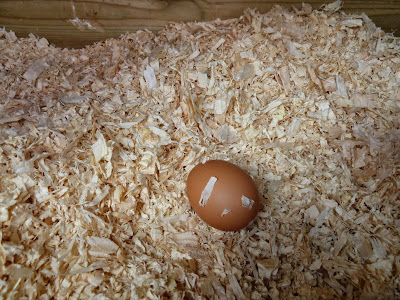 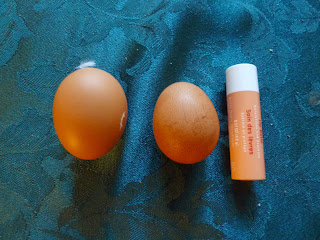 Altogether we had 3 eggs today. One very large one from Frodo, one medium egg from Meg and one small egg from Stella. 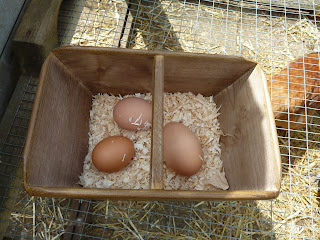 As rain was forecast today I thought I'd let Stella and Doris have a run around on the grass while it was still sunny this morning. 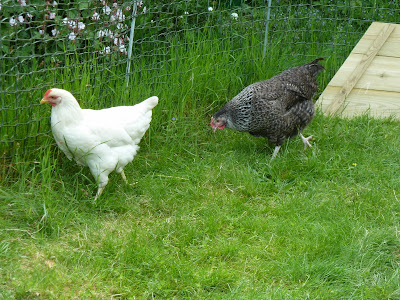 Stella is still the tamest chicken we have ever had. She doesn't mind getting so close she touches me and is happy to walk over me if I'm in her way. She also doesn't mind me touching her and stroking her, so is very easy to pick up.  Doris is still very nervous of us, but I'm hoping if I spend enough time with her she will get used to us, as Meg has done. We couldn't pick Meg up to begin with but it's much easier now. 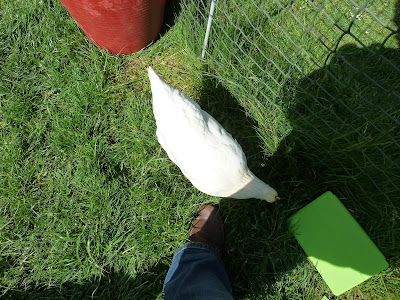 After a while Doris went upstairs to the nest box. It looked like we'd have a third egg. When she came down a bit later there was no sign of an egg. She probably decided she didn't want to miss any fun. However, Stella hopped into the run as she came down, so I shut them both in. 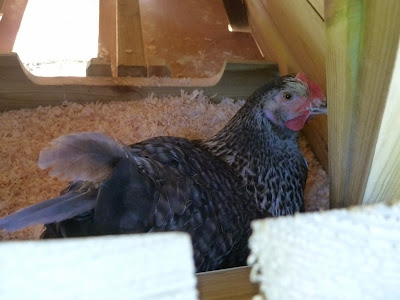 As she had already laid her egg, I thought I'd let Meg have some time on the grass too, but not long after I had put her in the pen she flew over the fence and onto the top of the rockery, without even jumping up onto the top of the run first.  Perhaps she didn't like being on her own, or maybe was afraid of the two in the new ark after the way they treated her when she was on the grass with them yesterday evening. They jumped on her and pecked her back a few times, although never for long as we separated them as soon as we noticed. 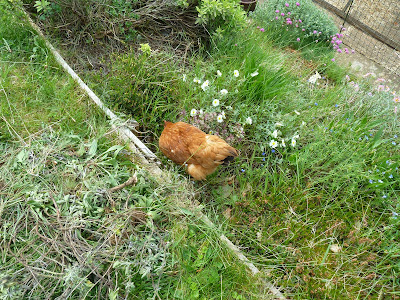 Frodo had distracted me, by looking like she had plans to fly out of her pen. Just before I took this photo she had been flapping her wings a lot. On reflection, I think this may have been her asserting herself as top chicken. 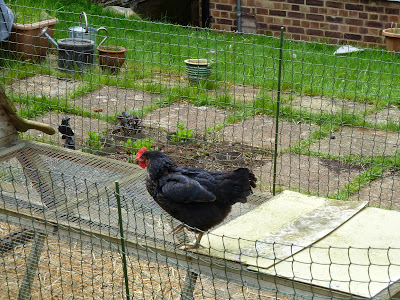 So I picked Meg up and took her back to her home with the two older chickens. We want to integrate them all eventually, but are going slowly so the two youngest don't get stressed.

Today was our best day in a long time for eggs. Meg and Frodo both laid eggs. Meg laid 10 eggs in a row and then had a well-earned rest yesterday. Frodo lays for a few days and them might have a few days off, although I think it was only one day after laying for five days this time. Both laid bigger than usual eggs for themselves. Meg's was 70g, her more recent eggs having weighed 60g and Frodo's was 90g, where last week her eggs were 80g. 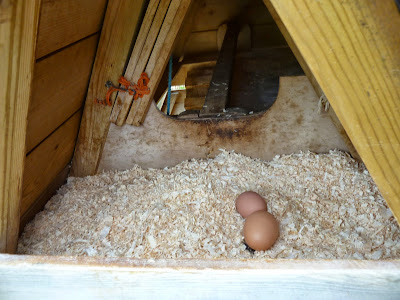 Doris also laid another egg in the nest box, which we believe is her fourth. It's quite a dark one compared to the other's and very slightly speckled. Hers was 60g whereas Meg's fourth egg only weighed 50g, but I think Doris is going to be bigger than Stella or Meg. 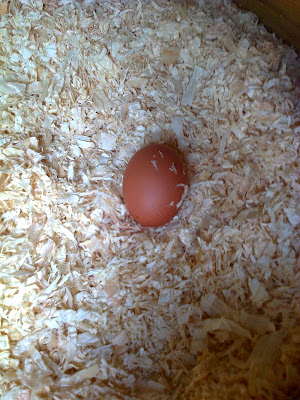 A Speckeldy seems to be the same cross as a Blue Belle, but with the opposite parents. In other words the Cucou Maran is the mother in one hybrid and the father in the other. I presume the other parent is a Rhodes Island Red, but I'm not sure.
Posted by Karin at 21:30 No comments: