It may be very cold outside still, but if you haven't done it already, and you have the space to plant them, you can chit potatoes without venturing outside. 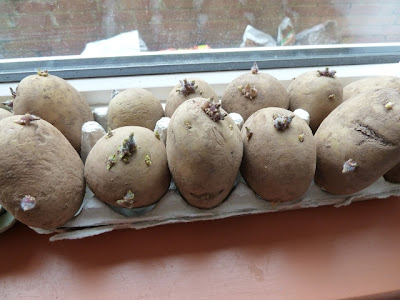 Chits are the shoots that sprout on potatoes when you've kept them a week or two, even if you've tried to keep them dark.  It's what potatoes do naturally.  It's the way they multiply.

We bought a small bag of Pentland Javeline seed potatoes when we visited Wisley in the middle of January. These can be used either as first earlies for tasty new potatoes, or for maincrop if you want to leave them in the ground until they are bigger.

The weekend before last I noticed they were sprouting already and I didn't want the chits to be damaged, so I set them out in an egg box to keep them separated from each other.  They need to be kept in a frost free place and as cool as possible.  For strong, sturdy shoots the potatoes should be kept in the light.  Keeping them in the dark will make for long, spindly shoots which will break easily.

If you buy potatoes from a garden centre now or in a few weeks time they will probably have started to sprout.  When asked, members of the Gardeners' Question Time panel were divided about whether it is necessary to chit potatoes. The consensus of opinion was that having longer shoots might mean a slightly earlier crop, but was unlikely to make much difference except where First Earlies are concerned. If the shoots are not obvious, set the potatoes in the egg boxes with 'eyes', or tiny buds, uppermost. If there are a lot of eyes, have the area with the highest concentration of eyes or the sturdiest shoots uppermost.

The advantage of buying potatoes early is that you have a greater choice and are more likely to be able to buy the variety you want.  This is probably why we need to set them out for chitting them, otherwise the shoots might be damaged as the potatoes knock against each other, or get trapped in the netting of the bag they are in.

It is recommended that you buy proper seed potatoes rather than potatoes you've bought from the green grocer or supermarket, to avoid bringing disease into your garden.

Potatoes do take up quite a bit of space, so they aren't a good idea for small gardens.  You can grow them in tall tubs, but as well as adding more soil as the leaves show, you will need to water them well to get a reasonable crop. 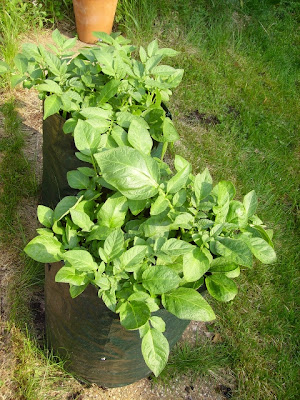 I look forward to reading your comments, it's always good to hear encouraging words or relevant hints and tips.